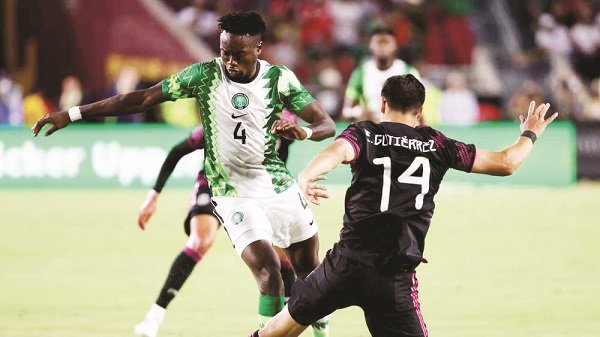 Following the 4-0 thumping which Nigeria suffered in the hands of Mexico in an international friendly played in the US on Sunday morning, a number of NPFL stars have shared their thoughts on the defeat even as they hope for better outings in subsequent games.

Atletico Madrid’s Hector Herrera scored twice, while Rogelio Funes and Jonathan dos Santos got the other two goals as El Tri strolled past a Super Eagles team B which was largely made up of players plying their trade in Nigeria.

The defeat was the heaviest loss Nigeria have suffered in over two decades and that has prompt a lot of people to question if the home-based stars are actually good for the main team.

But reacting to the disgraceful defeat, former Lobi Stars man, Reuben Ogbonnaya, has opined that the home-based players were probably overwhelmed by the occasion.

“The Mexican players are exposed and play for some of the biggest clubs in the world. Most of our boys were playing outside Africa and at this level for the first time.

“Some of them were intimidated by the crowd and the level of the opponents but they did their best. If they continue getting exposure like, they will surely get better,” the former Pillars man added.

In the same light, Nasarawa United defender Emmanuel Makama has absorbed his colleagues off any blame insisting that they would perform better if they play more games together.

“I won’t fault the players for their performance. I was not surprised by the scoreline because this is their first time travelling out of the country for such a match. Some of them I guess were overwhelmed but with more games like this, if possible, they will get better.”

“I think there wasn’t enough time for the Nigerian team to bond very well before the game. Yes, the result says it all,” the 29-year-old said.